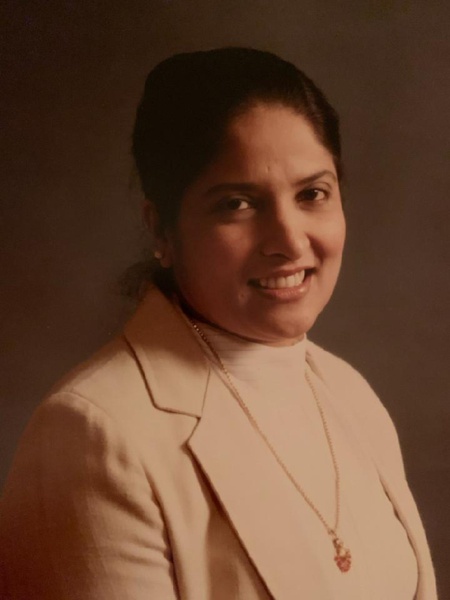 Vathsala S. Holla, M.D., 75, Clarks Summit, died Friday in Geisinger Community Medical Center, Scranton. She was the loving and caring wife of P. Shripathi Holla, M.D., a retired neurosurgeon. The couple had celebrated their 50th wedding anniversary on May 27.

Born April 13, 1945, in Mysore in British-occupied India, she was the sixth child and only daughter of the late Bhargavi Bai and the late S. Anand Rau, who was an entomologist and chief scientific officer of United Planters Association of South India. She completed high school at Christ the King Convent in 1961 and her medical studies in Government Mysore Medical College in 1970. After graduating, she challenged family custom and prevailing social norms by marrying for love rather than through an arranged marriage.

After immigrating to the United States, she completed her internship in medicine in Albany, N.Y., in 1973; her residency in pediatrics in University of Connecticut hospitals in 1976; and a fellowship in neonatology at the University of Mississippi Medical Center in 1979. The couple arrived in Clarks Summit in 1981, and they made the area their home. Vathsala worked as a neonatologist in Community Medical Center for 22 years, caring for thousands of sick and premature babies throughout her career. She was also a skilled vocalist in the Carnatic style of music, and she performed in many concerts both in the United States and India after her retirement from medicine. Throughout her life, she delighted in the play and wonder of children, and she extended her warm and generous spirit, as well as her passion for music, to all she encountered.

She was also incredibly organized and meticulous in each of her endeavors from folding fitted sheets (she made Marie Kondo look downright disheveled) to planning for her hospital stay. She liked to be at least five minutes early for everything. Unfortunately, her death was a little too early for everyone else.

Also surviving are a daughter, Alaka Holla and her husband, Malhar Nabar; a grandson, Mihir Holla Nabar; and a granddaughter, Reva Holla Nabar, all of Bethesda, Md.; a brother, A. Nagaraj Rao of Bangalore, India; cousins, nieces and nephews scattered across the globe; and a large local community of friends.

She was also preceded in death by five brothers, A. Madhava Rao, A. Prahlad Rao, A. Raghavendra Rao, A. Subba Rao and A. Sreeshaw.

Services were held by Mr. Vaithinathan.

To order memorial trees or send flowers to the family in memory of Vathsala Holla, M.D., please visit our flower store.
Send a Sympathy Card