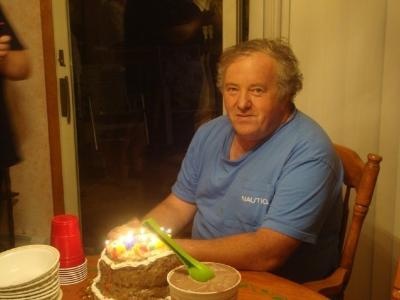 Theodore Varady 61 years, Dalton, died Tuesday, May 14, 2013, in Memorial Sloan-Kettering New York, NY after a long courageous battle with cancer. His wife of 35 years was the former Vicky O'Dell. The couple was married September 24, 1977.

Born August 24, 1951 in New Brunswick, N. J. he was the son of the late Stephen and Mary "Mamie" Hryhorcoff Varady. He lived in Benton Township for over 29 years in a home he and his wife hand built with much love and hard work.

He received his B.A. in communications from Kings College, Wilkes-Barre. Prior to retirement he was employed by RCA, Dunmore, for over 29 years and later worked at WBRE television and WVIA television as a communications specialist Master Controller.

In lieu of flowers, memorial contributions may be made to Hope Lodge, 132 W 32nd St., New York, NY. Memorial Service will be held on Sunday, May 26, 2013 at 3 PM at South New Milford Baptist Church, New Milford, PA.

To order memorial trees or send flowers to the family in memory of Theodore Varady, please visit our flower store.
Send a Sympathy Card