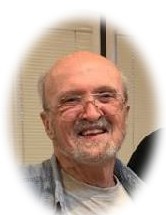 Roger D. Wallace, Ph.D., 77, South Abington Twp., died Friday at Geisinger Community Medical Center. His wife was the former Carol A. Wilkie Wallace, Ph.D. The couple was married for more than 33 years and spent every one of those years accumulating incredible friends, family, cats, memories and antiques… in no particular order.

Roger was born Feb. 26, 1944, in Indianapolis, Ind. He was the son of the late Clinton Avery and Margaret Marie (Lillard) Wallace. Roger was a graduate of Broad Ripple High School, Indianapolis, and received his Bachelor of Arts from Butler University in English and literature. He received his doctorate degree from the University of Michigan in mass media and journalism ethics, where he was a member of the National Communication Association Lambda Pi and served as the Communication Honor Society advisor.

A beloved professor of communications at the University of Scranton since 1975, Roger was a respected academic, published author, tenured professor and revered mentor/friend to countless students that were fortunate enough to take advantage of his wisdom, insight and willingness to go above and beyond. He was a proud member of the South Abington Lions Club, having served as president.

While his impact on the academic community is impressive, Roger’s profound impact on virtually everyone he’s crossed paths with is where the magic lives. Whether you knew him as Mr. Wallace, Dr. Wallace, Rog, Wog, Dr. Death (if you know – you know), Lions Club guy, golf guy, Dr. W, Nabe, Dad, Daddio, or Papa, one thing is certain, you loved him. Beyond the warmth of his infectious laugh was the unmistakable comfort, wisdom and presence he brought to every conceivable situation and conversation. His loss is profound, but fortunately for us all, the hole his absence leaves behind will quickly be filled in by the legendary memories and hard-to-believe stories we will all continue to tell. One thing each “compartment” of his life held at the end of the day was the fact that Roger did not simply have one gift or another with regard to his impact on us all, he quite simply was the gift.

A celebration of Roger’s life will be Monday at 7 p.m. at the Jennings-Calvey Funeral and Cremation Services Inc., 111 Colburn Ave., Clarks Summit. Interment, private at the convenience of the family. The family will receive friends Monday from 5 to 7 p.m.

Memorial contributions may be made to the charity of the donor's choice.

To order memorial trees or send flowers to the family in memory of Roger Wallace, Ph.D, please visit our flower store.