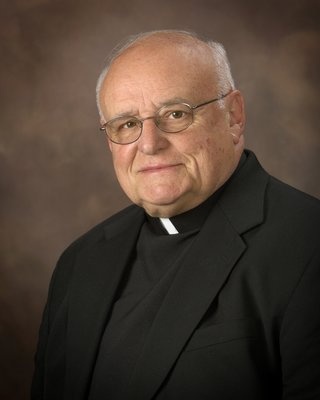 Monsignor Louis, son of the late John J. and Mildred (Kelly) Louis, was born in Scranton on May 29, 1936. Monsignor attended high school at St. Patrick's Parish in Scranton and college at Mount St. Mary's in Emmitsburg, Md. He had his seminary training at Theological College, Catholic University of America, Washington, D.C., and North American College in Rome. Monsignor earned a Master of Arts in philosophy from Catholic University and a licentiate in Sacred Theology. He was ordained to the priesthood on July 15, 1962, at the Church of the Twelve Apostles in Rome by Bishop Filippo Pocci, Auxiliary Bishop Emeritus of Rome. After ordination, Monsignor returned to Rome to earn a doctorate in Canon Law from the Gregorian University and to serve as a peritus during the Second Vatican Council.

Monsignor Louis has served as assistant pastor at Our Lady of Mount Carmel Parish, Lake Silkworth; Our Lady of Mount Carmel Parish, Dunmore; Our Lady of Snows, Clarks Summit; and as administrator of St. Mark's Parish, Inkerman. He was appointed pastor of St. Gregory's Parish in Clarks Green in September of 1977, a position he held until his retirement and appointment as pastor emeritus in July 2011. He was a beloved pastor for 34 years.

He was made a chaplain to His Holiness in September of 1973 and a prelate of honor in November of 1978.

Education was close to Monsignor's heart evidenced by the fact that during his tenure as pastor at St. Gregory's he educated a countless number of eighth grade students at Our Lady of Peace School.

Monsignor has also served the diocese as a professor at St. Pius X Seminary in Dalton, where he was also dean of studies. He was appointed assistant chancellor of the Diocese in 1971. His work with the Diocesan Tribunal includes positions as pro-Synodal judge; defender of the bond; adjutant judicial vicar and his appointment as vice-officialis of the Tribunal in 1972. In addition, Monsignor Louis served the diocese as dean of the Abington Deanery; a member of the Council of Priests; the Priests Education Committee, and the Priests Advisory Committee for the Diocesan Annual Appeal.

Monsignor Louis celebrated the 50th anniversary of his ordination with a Pontifical Mass celebrated by the Most Rev. Joseph C. Bambera, D.D., J.C.L. on June 21, 2012.

Monsignor Louis had a great love for animals. He could often be seen with one of his many canine friends on Abington Road.

Monsignor also served as chaplain to the fire departments in Scranton and Clarks Summit.

A Pontifical Mass of Christian burial will be celebrated by the Most Rev. John M. Dougherty, D.D., auxiliary bishop emeritus of Scranton, on Monday, April 30, 2018, at 11 a.m. at St. Gregory's Church, Clarks Green. Interment will be in Cathedral Cemetery, Scranton, Pa.

In lieu of flowers, memorial contributions may be made to St. Gregory's Forward in Faith Building Campaign, 330 N. Abington Road, Clarks Green, PA 18411.

To order memorial trees or send flowers to the family in memory of Monsignor Louis, please visit our flower store.
Send a Sympathy Card