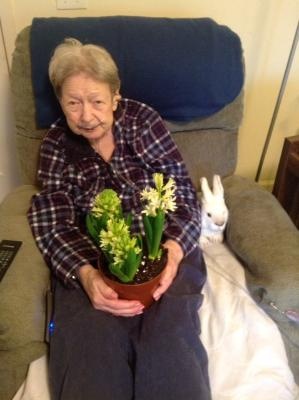 Martha Frances Miller Rogan, 94, of Scranton, died Thursday at Moses Taylor Hospital. She was the wife of the late Patrick J. Rogan Sr., who died March 10, 2004. The couple were married more than 57 years.

Born Feb. 22, 1919, in New York City, daughter of the late Francis and Anna Hrmodka Miller, she moved to the Scranton area in 2010 to be near her family, having moved from Iselin, N.J. She was a graduate of Newark High School and the Newark School of Fine Arts. She honorable served in the Navy as a Baker Second Class during World War II. She formerly was employed by New Jersey Bell Telephone as a telephone operator.

Martha's father died four months before her birth, drowned on the steamer San Saba, sunk by a German mine. He had served in the Navy. Shortly after Martha's birth, her mother, Anna, died, leaving Martha and her sister orphaned. In January of 1928 the two sisters were reunited at the ship SS Theodore Roosevelt. Martha had returned from Czechoslovakia where she was being cared for by her grandparents following the sad deaths of both her parents. The reunion of these two loving sisters was made possible by the fortitude and resourcefulness of the International Red Cross and the American Red Cross. The sisters enjoyed their lives with much gratitude and appreciation. She was a member of Czechoslovak Society of America and St. Ann's Basilica Parish.

She was also preceded in death by a grandson, Joseph Francis Rogan.

The funeral will be Monday in St. Ann's Basilica, 1250 St. Ann's St., Scranton, with Mass at 1 p.m. to be celebrated by the Rev. Francis Landry, C.P. Interment, Hickory Grove Cemetery, Waverly Twp., will be at the convenience of the family.

Relatives and friends may call Sunday, 4 to 7 p.m., at the Jennings-Calvey Funeral and Cremation Service Inc., 111 Colburn Ave., Clarks Summit.