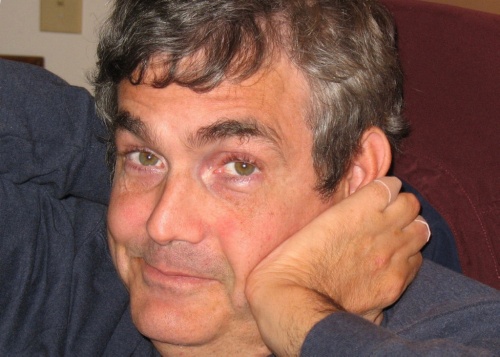 Mark attended Keystone College and was a graduate of LaSalle University, Philadelphia, Pa. He worked for the Pennsylvania Department of Treasury in Harrisburg. After moving home, he took a temporary job on the snow crew at Elk Mountain. During his employment, he suffered a tragic accident that left him a quadriplegic. Despite this, he carried on for 23 years, living in his own home with an Airedale as a sidekick. According to Mark, no other breed could hold a candle to an Airedale.

He had more trials than any human should be expected to bear, and he faced them admirably, with courage, grace and a wry sense of irony. His keen interest in politics was evidenced by his extensive collection of political memorabilia. His interest in sports extended to the Steelers, the Braves and the RailRiders. Mark enjoyed hearing, telling and retelling corny jokes; the bigger the groan, the more he liked it. Mark loved and was beloved by his family, and he had a special relationship with all 24 of his nieces and nephews. When the young folk were around, Uncle Mark was at his liveliest. They will miss him, as will his six siblings and their spouses: sisters, Paula Roe-Prior and husband, Jack Prior, Waverly Twp.; Janet Murray and husband, Joe, Scranton; Marie Hanlon and husband, Michael, Pittsburgh; brothers, Gene and wife, Mary Cullen Roe, Plymouth, Mass.; Chris and wife, Joanie Gardier Roe, Malvern; and Tom and wife, Liz Kelley Roe, Clarks Summit.

We wish to thank all the individual nurses and aides who cared for Mark over the years, and his loyal, lifelong friends. A big shout-out to all the neighbors who befriended Mark, ever willing to take time to stop and chat or chase down a dog. Know that we are very grateful.

A Mass of Christian Burial to be celebrated by the Rev. Johyn M. Lapera, pastor, will be held Tuesday, May 14, at 11 a.m. at the Church of St. Gregory, Clarks Green.

A time of visitation with the family will occur before the Mass at St. Gregory's beginning at 9:30 a.m.

If you wish to, make a donation in Mark's memory to St. Joseph's Center, Scranton, www.stjosephscenter.org/opportunitiestohelp; or to the Miami Project to Cure Paralysis/Buoniconti Fund, https://www.themiamiproject.org/donate .

To order memorial trees or send flowers to the family in memory of Mark Roe, please visit our flower store.
Send a Sympathy Card