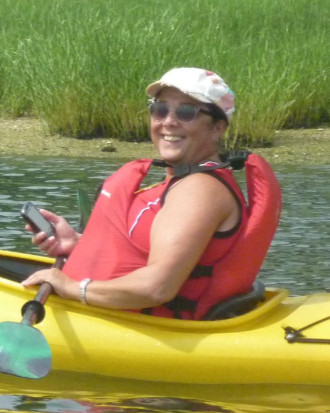 Judy Ann Nolan Simmons, 69, of Scranton, succumbed to her decade-long fight with cancer and was finally set free on January 19th, 2023, with her loving daughter by her side. She was preceded in death by her loving adoptive parents John W. & Trinita Rivera Nolan, as well as a sister, Patricia.

Born in Piraeus, Greece on February 2nd, 1953, Judy was raised on Long Island, New York and attended Sewanhaka High School, spending summer months at Gardner Lake Camp in Connecticut. She was the wife of the late Joseph D. Simmons of Aruba, with whom she shared her one & only child, Jessica. In what can be described as nothing short of a miracle, she was recently reunited with her biological family in Greece, 66 years after leaving her home country.

Judy was employed in the Customer Care Department of Mondelez International and an active parishioner of local Roman Catholic Churches. She spent her leisure time kayaking, travelling, reading, appreciating music, cooking, dining out and otherwise fully immersing herself in the life experience. She was quick to participate in an adventure and always had a story to tell.

Judy is survived by her daughter Jessica, son-in-law Ben McCusker & her beloved grandson Silas; a brother Jerry Nolan & her biological family in Greece. She leaves behind an army of friends & extended family, notably her life-long confidant Carmen “Pame” Jimenez and her treasured Amazon Parrot, Prince who she began raising in 1976. A special note of gratitude to Dr. Lisa Thomas and Dr. Jeffery Montgomery of Scranton, as well as Dr. Suresh Nair of Allentown, for their unwavering support and guidance of the past 10 years.

Judy lived life by her own rules and had an intense presence. She added her own personal blend of spice to life and will be missed tremendously. Judy will be remembered for the dignity, grace, and passion she brought to this world. May we all live our lives with the same seemingly infinite sense of voracity.

Friends and family are invited to gather in a celebration of Judy’s dynamic life on Thursday, February 2nd from 12PM-2PM on what would have been her 70th birthday at Jennings-Calvey Funeral and Cremation Services, Inc., 111 Colburn Avenue, Clarks Summit, PA.

To order memorial trees or send flowers to the family in memory of Judy Ann Nolan Simmons, please visit our flower store.