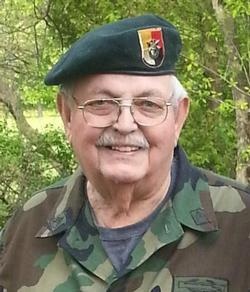 Jude T. Fitzgerald, age 76 of Adell, WI formerly of Clarks Summit, died early Tuesday afternoon (November 17, 2015) at the Sharon S. Richardson Hospice where he had resided for the past four days.

He was born on December 10, 1938 in Scranton, PA, a son of the late John and Marie (Mulrooney) Fitzgerald.

He was a1956 graduated of Abington Heights High School in Clarks Summit; he attended the University of Scranton and joined the United States Army. He honorabley served his country, from 1962 joining the elite 82nd Airborne Division from 1962 to 1963 and then with the 1st Special Forces Group (Okinawa) from 1963 to 1965 and with the MACV (Military Assistance Command-Vietnam) from 1965 to 1966 and 3rd Special Forces Group from 1966 to 1967. He was recruited to serve in the Central Intelligence Agency (C.I.A.) after six tours in Vietnam Nam,

He had lived in Washington DC, Louisville, KY and they moved to Adell in 1971.

After being with the Central Intelligence Agency, He had lived in Washington DC, Louisville, KY and they moved to Adell in 1971.

Jude was so proud of his service in the Army that he asked to be buried in his Fatigues and Green Beret.

He was a specialist of loss prevention for Walgreens Corporation or 31 years retiring in 2001.

He is also survived by nieces, nephews, many other relatives and friends.

He was preceded by a sister: Peggy Moylan, two nephews: Marty Moylan and Jonathan Supanek and son-in-law: John Karas.

A memorial Mass will be Saturday, Dec. 2 at 10 am at Our Lady of Snows Church, Clarks Summit to be celebrated by Fr. Richard J. Cirba. Internment was in St. Patrick's Catholic Cemetery, Adell, WI.

Our Lady of the Snows
301 South State Street
Clarks Summit, Pennsylvania, United States
18411
Get Directions
To order memorial trees or send flowers to the family in memory of Jude Fitzgerald, please visit our flower store.