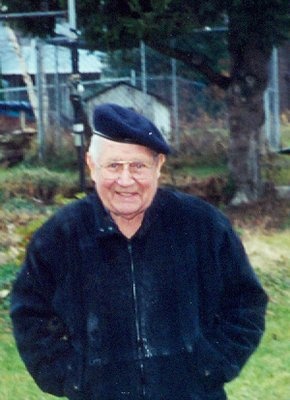 Joseph "Shoee" Danoski, 95, retired mushroom picker, of Clarks Summit, formerly of the Greenwood section of Moosic, passed away peacefully on Monday His wife of 30 years, the former Mildred Yanchowsky, passed away on Feb. 5, 1994.

Born in Greenwood on Dec. 29, 1922, son of the late Anthony and Mary Gajewiecz Danoski, Shoee was one of a kind. He got the nickname "shoestring" when he was young. He was so skinny that his boss called him "shoestring" but shortened it to "Shoee" and that name stuck. His beloved wife, Millie, was the only one who called him Joe. At the age of 14 when his dad passed away, Shoee proudly took over the duties of raising his younger siblings. He always joked about telling his late brother Clem that he needed to go out and find himself a wife while Shoee took care of their sisters.

Shoee wore many hats but was most known for wearing his black beret. He was a smokejumper on the West Coast with the Civilian Conservation Corps fighting wildfires. He was also a taxi driver for a brief period. Shoee proudly served in the Army during WWII and saw duty overseas in Germany and France. He helped to free concentration camps and bury General Patton. After an honorable discharge, he worked for Contempri Homes and eventually retired from there in 1987.

Many moons ago, Shoee was very active as a coach in Moosic Little League, Moosic Teener ball, and Boy Scouts. He was also known to be quite a strict umpire. If you happened to kick dirt on home plate when Shoee was behind the dish, you could be guaranteed that the next pitch would be called a strike even if it was over your head.

Shoee had a sense of humor that was unmatched. He always had a joke for everybody. New Years Eve will never be the same without Shoee entering the room wearing just a diaper dressed as the New Year's baby.

He is survived by son, Jody and wife, Mary Jo, of Clarks Summit, with whom he resided; grandchildren, Monika, of California, Pa.; Carly, of Bethlehem; and Joseph, of Clarks Summit; sisters, Antoinette, Bensalem; Frances and husband, Robert Toole, Moosic; and Veronica Rohland, West Pittston. He is also survived by his faithful beagle, Shelby; and his coffee klatch friends at McDonald's.

Preceding him in death were sisters, Theresa and Alfreda; and brother, Clemens.

A Mass of Christian Burial will be Friday at noon at Our Lady of the Abingtons Church, 207 Seminary Road, Dalton, to be celebrated by the Rev. Arbogaste Satoun, with military honors. Interment will be private at the convenience of the family in Indiantown National Cemetery, Annville.

Our Lady of the Abingtons
207 Seminary Road
Dalton, Pennsylvania, United States
18414
Get Directions

To order memorial trees or send flowers to the family in memory of Joseph Danoski, please visit our flower store.
Send a Sympathy Card