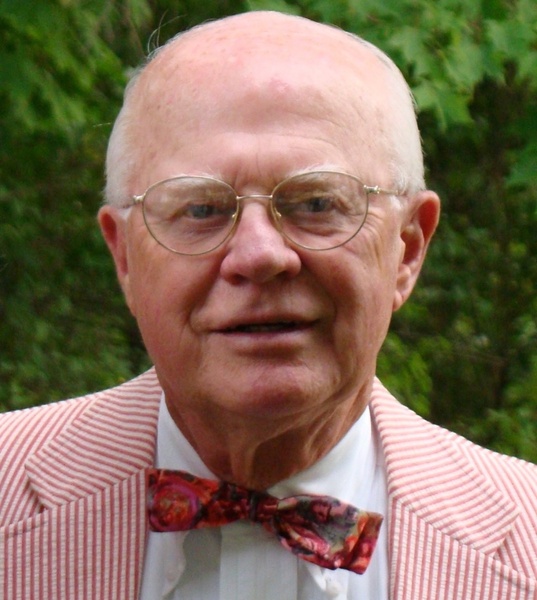 John Arthur Clare Atkins, M.A. Cambridge, American, Brit and Gentleman has died May 21, 2022.  He leaves his wife of 60 years, the former Patricia Payne.

John was born in Cranwell, England on 11 August 1935. He was the son of Arthur Clare and Beatrice Atkins.

John and Pat met on Grand Cayman while he was surveying the island, and she was vacationing.  They fell in love instantly and they were married 6 months later.  They embarked on a lifetimeof adventure that would take them to West Africa, Bucks County, Elmira, NY, Bonaire Netherlands Antilles, and Cleveland, Ohio before returning to Clarks Summit.  John was employed by International Salt Company which later became Akzo Salt.

John loved to both play and watch golf, and he played courses around the world. He loved to plan surprise family trips, taking the crew to a variety of different and wonderful locations. Thesewere all mystery trips, never being revealed until a few days before – the suspense was made more fun with fake clues. John was fond of a good dessert and would never turn down any chocolate. John, along with the great Jack Stroney, was instrumental in getting the Abington Heights School Board to introduce soccer to the high school sports programs. Pat and John really enjoyed hosting amazing parties and events.  Whether it was a Fourth of July Fest, the winter bonfire, or any other party, they were always fun, well-planned and memorable.  Sorry if you missed any! They both also loved creating and managing Patsel’s restaurant – an amazing place for ambiance, food and celebration. John was a charming host, visiting every table, meeting people and creating new friendships.  Over the years, many people sought his counsel for both work and personal challenges.  His sound judgement helped guide many to make better decisions.  And being a great English gentleman with a steady disposition, most people are amazed that John put up with Pat for 60 years.

What follows is his rather busy biography:

At elementary school during World War II in Cambridgeshire.

Family went by ship to Egypt in 1946. Lived in Ismalia on Suez Canal.

Returned by ship to England in 1947

● Did three tours of duty, putting in ground survey framework for control of aerial survey mapmaking.

Then 25 years based at headquarters, for International Salt Company, later Akzo Salt,

Director of Safety, Environmental and Regulatory Affairs for USA.

Never one to be idle, Pat and John began planning for arestaurant on land purchased in 1996.  Patsel’s operated betweenAugust 1999 and August 2014, during which Patsel’s received the AAA Four Diamond Award for 15 consecutive years.

John and Pat have lived in Waverly for 50 years.

John’s Former Board Positions in the Community Included:

Board Member and Past President of Junior Achievement

Whether you were part of the family, or worked with him or was his friend, it was an honor to know this man.

John is survived by his beloved and devoted bride Pat; Son Carter and his wife Hansook Atkins of Bethlehem, PA  and son Tim and his wife Tara Atkins of Dalton, PA.  Brother Douglas Atkins and his wife Connie Atkins of Garboldisham, England.  Grandchildren Royce, Andrew, Peter, Quincy and Spencer.  Various nieces and nephews in England, Connecticut and Pennsylvania.

Charitable contributions in honor of John to The Boys and Girls Club of Scranton, Junior Achievement of NEPA or to the charity of their choice.

A special thank you to Gretchen Eagen Mackie and her wonderful staff of care workers and to the hospice of Sacred Heart for helping with John’s last weeks on this earth.

Funeral service will be private at the convenience of the family.  A Celebration of John’s Life will be held on June 2, 2022 at Constantino’s from 4 to 8 pm.

To order memorial trees or send flowers to the family in memory of John Arthur Clare Atkins, please visit our flower store.