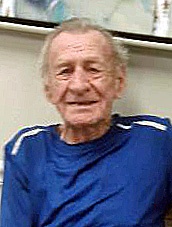 James “Chick” Cicchillo, 87, Chinchilla, died Christmas Day at home. He was the husband of 61 years married to the late Anna Labdafsky, who died Oct. 21, 2019.

Born Jan. 12, 1933 in Scranton, he was the son of the late Peter and the late Veronica (Wiesel) Cicchillo.

He was educated in the Scranton Schools and honorably served his country in the United States Army. He formerly had been employed by Eureka Printing Company as a shipping supervisor and later a security guard.

He was a member of Our Lady of the Snows Parish, Clarks Summit. He was proud to have served his country, and an avid New York Giants fan.

The family would like express sincere appreciation to the dedicated caregivers, Jason, Marion and Gerri for the kindness they shared with their father.

The funeral service will be Tuesday at 10 a.m. at Jennings-Calvey Funeral and Cremation Services Inc., with a blessing service by Msgr. Joseph G. Quinn, pastor Our Lady of Snows Parish.

To order memorial trees or send flowers to the family in memory of James Cicchillo, please visit our flower store.