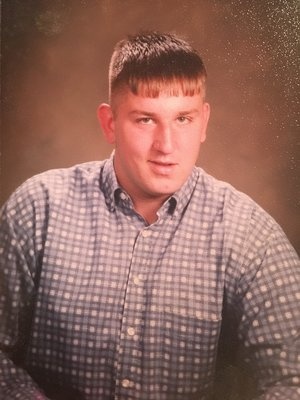 Jack graduated from Scranton Prep in 1999 and went on to further his education at Keystone College. He earned his CDL and worked as a truck driver for various companies. He was an avid hunter, fisherman, and was a die hard Atlanta Falcons fan. Most of all he enjoyed spending time with his family, especially playing football with his children, Emillee, Owen and Chase. Jack was one of the most genuine people, a true gentle giant with a big heart and easy going nature.

Surviving in addition to his parents are his children: Emillee, Owen, and Chase Rose of Falls, one brother: Chad George of Hillsboro, OH; two sisters: Holly and Meghan Rose of Falls; grandparents: Stephen and Josephine Franko of Falls; aunts, uncles, a niece, nephew and cousins.

He was preceded in death by his grandparents: Bernie and Virginia Rose and great-grandparents: Phillip and Mary Zanghi & Stephen and Stella Franko.

The funeral will be Thursday at 11am from Church of the Holy Redeemer, 2435 State Route 92, Falls, PA 18615 with services by Monsignor John J. Sempa.  Interment: Mt. Olivet Cemetery, Wyoming, PA. A viewing will be held on Wednesday from 4-7pm at the Jennings-Calvey Funeral and Cremation Service, Inc., 111 Colburn Avenue, Clarks Summit, PA 18411.

In remembrance of his volunteer efforts, in lieu of flowers, memorial contributions may be made to the Seasons of Love Homeless Program, c/o Church of the Good Shepherd, 1780 N. Washington Ave., Scranton, PA 18510.

To order memorial trees or send flowers to the family in memory of Jack Rose, please visit our flower store.