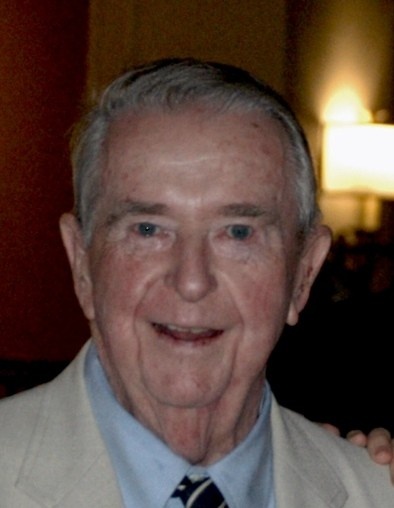 Girard R. Donahoe, 88, Clarks Summit, died Wednesday in Falmouth, Maine, with many loved ones by his side. He was a devoted and loving husband of 57 years, married to the late Alice Marie Waters, his “sweetie.”

Born April 11, 1930, in Scranton, he was the son of the late William and Annette (Malarkey) Donahoe. He attended Scranton Preparatory School and was a graduate of Loyola High School in Maryland. He received a bachelor of arts from Mount St. Mary’s University, Emmitsburg, Md. He proudly served his country as an officer in the United States Navy aboard the aircraft carrier, the USS Bennington. Jerry and Alice were stationed with the Navy in Newport, R.I., where their first son, William, was born. Upon his discharge, he returned to Scranton to join his brother, Don, where, together, they built a successful food marketing company, the W. Donald Donahoe Co. Jerry enjoyed a strong reputation in the industry and was later joined by son, William, and nephew, Jeffery, in the business.

His family grew to include six more children. In 1968, they began vacationing at the Village of Four Seasons at Elk Mountain, where many lifelong friendships were formed. Alice and Jerry met at the Jersey shore and returned again during the 70s to begin spending their summers in Avalon. Jerry’s Avalon home was his happy place. He found great joy sharing many fun filled years and creating wonderful memories there with his children, friends and Alice’s extended family, who he jokingly and lovingly called “her people.” At home in Clarks Summit, Jerry enjoyed his Monday night tennis group and continued playing into his 70s. He played golf as often as possible at the Country Club of Scranton, where he was a member for more than 50 years. He was active in his church and held a number of leadership roles in the Catholic community. All who were lucky enough to meet Jerry felt the joy and love of life that he shared so generously. To his family, and so many who loved him dearly, he was “Da,” a kind, loyal, honest and generous man who brightened our days and offered guidance and support to others in difficult times.

The family will receive relatives and friends Wednesday from 5 to 7 p.m. at the Jennings-Calvey Funeral and Cremation Service Inc., 111 Colburn Ave., Clarks Summit, PA 18411; and again, Thursday, 10 a.m. to 10:45 a.m. at Church of St. Gregory prior to Mass.

In lieu of flowers, the family requests memorial contributions be made to the Preble Street Resource Center, 38 Preble St., Portland, ME 04101, who take care of those most in need in Portland, Maine.

To order memorial trees or send flowers to the family in memory of Girard Donahoe, please visit our flower store.
Send a Sympathy Card