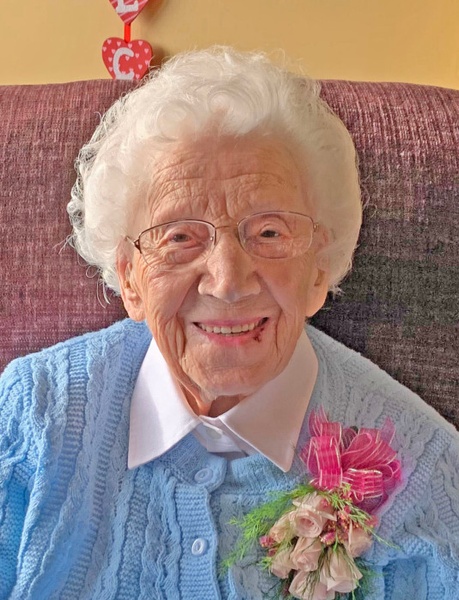 Born on Jan. 23, 1915, in Olyphant, she was the daughter of the late Stephen and Helen (Budash) Barilka.

Formerly of Olyphant, she was educated in the Olyphant Schools and was a member of SS Cyril and Methodius Church. Since moving to Clarks Summit, she was a faithful member of Our Lady of the Snows Church.

A gracious and generous woman, she was a devoted wife, mother, grandmother and great-grandmother. An accomplished seamstress, she sewed and made clothing for her family to proudly wear. She was an excellent cook and baker and enjoyed sharing her ethnic recipes with family and friends. Genevieve was affectionately known as Gram and Aunt Gen, the cookie baker. A true lady of strong faith, she was a daily communicant having attended Mass faithfully. Her gentleness and smile will be sadly missed by all who knew and loved her.

Genevieve’s family wishes to thank the entire staff of the Jewish Home for their loving care and concern for Mom, especially as they referred to the “dear ones on the fourth floor.”

A Mass of Christian Burial will be private at the convenience of the family at Our Lady of Snows Church, Clarks Summit, to be celebrated by Monsignor Joseph G. Quinn, pastor. Interment will be at SS. Cyril and Methodius Cemetery, Peckville.

To order memorial trees or send flowers to the family in memory of Genevieve Vesko, please visit our flower store.