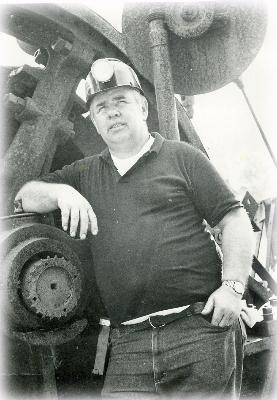 Edward "Butch-Coalman" Cherkoski, 81, Scott Township, died Wednesday in VNA Hospice Unit at Geisinger Community Medical Center. He was the husband of 54 years, married to the former Maryann Rakosky.Born July 13, 1933, in Scranton, he was the son of the late Stanley and Beatrice (Brasitus) Czarkowski. A Scott Township resident since 1960, he had moved from North Scranton. He was a graduate of St. Joseph's High School, he was proud to have lived in a Lithuanian neighborhood and was proud of his heritage. A hard-working man who posed the qualities of compassion and kindness with laughter while performing hard work. He was a successful owner-operator trucker his working career, having owned various trucks. He previously worked in the coal mines at the age of 15.He was a member of the Teamster Union Local #229. An activist for Independent truckers, he helped organized the 1972 trucker shutdown. He negotiated and meet with Gov. Milton Shapp on behalf of the truckers. He was a hauler of a variety of things, including cars, steel and fresh produce, and traveled throughout our country. He enjoyed traveling, having taken many family vacations and road trips.Butch was a friendly and outgoing man who enjoyed the outdoors, especially fishing. He enjoyed listening to Gospel music and was a fan of Johnny Cash, having listened to his music, knowing the lyrics by heart. He was proud to have taken others to the Lackawanna Coal mine tour.A collector by nature, he enjoyed antiquing. Proud of his Lithuanian heritage, he was a former member of the Lithuanian Society, North Scranton. His song and laughter will be sadly missed.Also surviving are two daughters, Sheri Rozaieski and husband, Paul, Scott Township; and Suzette Cardamone and husband, Steve, Madison Twp.; a brother, Richard Marcheski, Sterling; two grandsons, Paul Rozaieski, who is following in his grandfather's footsteps as an owner-operator trucker and enjoyed listening to his grandfather's knowledge of trucking; and Stephen Cardamone, whom he adored, and loved sharing with them stories of history and his life's journeys around the country; three granddaughters, Selena Simmons, who was raised as his own from a baby, whom he considered his third daughter; Sarah Rozaieski, his daily caregiver during his hospitalization; and Alexandra Cardamone, who was the youngest, who was cherished; and a great-grandson, Urijah.He was also preceded in death by sister, Alice Wysocki.The funeral will be Saturday at 12 noon at Mt. Bethel Baptist Church, 1309 Layton Road, Scott Twp., with services by Rev. Donald Hasselman, pastor. Interment, St. Anthony's Cemetery, Dickson City.The family will receive relatives and friends Saturday, 10 a.m. until 11:45 a.m., at the church.Arrangements are entrusted by Jennings-Calvey Funeral and Cremation Service Inc., 111 Colburn Avenue, Clarks Summit, PA 18411. Memorial contributions may be made to a charity of the donnors choice.