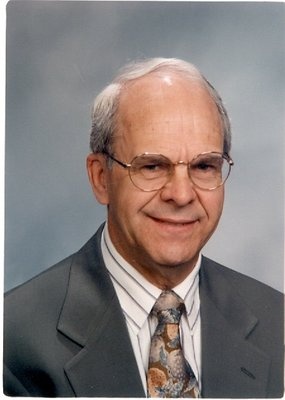 Richard J. Bourcier, Ph.D, 87, of Clarks Green, passed away peacefully at home Sunday. He was preceded in death by his wife of 33 years, Florence Michaud Bourcier, in 1994.

Born in New Bedford, Mass., he was the son of the late Adrien and Alida (Richard) Bourcier. Richard was a graduate of Assumption College, Bachelor of Arts, Laval University, Master of Science, and Suny University, Ph.D. During college, he was drafted into the United States Army and was stationed in the Panama Canal Zone during the Korean War. He attained the rank of sergeant and served from 1953 to 1955. After an honorable discharge, Richard dedicated his life to French education and was a member of many French teaching and language associations. He taught at Holy Cross College, Worcester, Mass., prior to coming to the University of Scranton in 1968. He retired from the university as a full professor after 26 years.

In 1995, he was conferred the rank of Knight in the French order of Academic Palms, (Chevalier dans l'Ordre des Palmes Academiques) in recognition of his efforts to promote French language, culture and civilization in the United States. The honor was conferred by the Ministry of National Education via the Prime Minister of France.

He was a parishioner of Church of St. Gregory, where he was a cantor and choir member for 45 years. In 2001, he received the Diocesan St. Cecilia Award for 30 years of service as a liturgical musician in a parish by Bishop James C. Timlin. Richard also had a passion for ballroom dancing his entire life and served as a past president of the N.E. Chapter of the United States Ballroom Dancing Association. He was a member of VFW Post 4909, Dupont, where he danced on Saturday nights.

He was also preceded in death by sisters, Marie, Gertrude, Alice and Doris, and a brother, Laurent.

The funeral will be Monday with a Mass of Christian Burial at 11 a.m. from the Church of St. Gregory, 330 N. Abington Road, Clarks Green. Interment, St. Catherine's Cemetery, Moscow. The family will receive relatives and friends Monday from 8:45 to 10:45 a.m. at the church.

In lieu of flowers, memorial contributions may be made to St. Gabriel's Monastery, 631 Griffin Pond Road, Clarks Summit, PA 18411.

To order memorial trees or send flowers to the family in memory of Dr. Richard Bourcier, please visit our flower store.