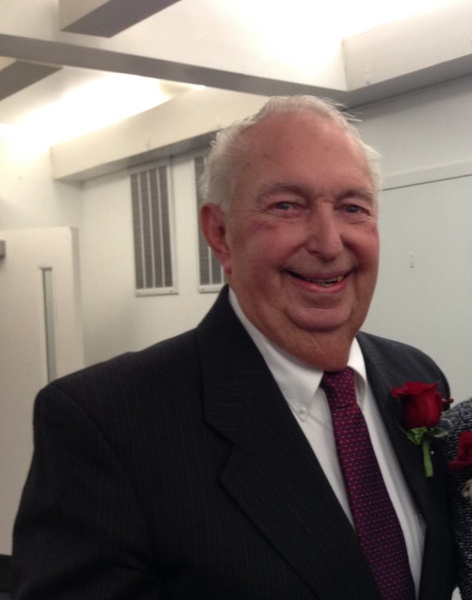 Dominic R. Scott of Clarks Summit, passed away Oct. 6 at Regional Hospital of Scranton, surrounded by his loving family. Born in Scranton, Dom was the son of the late Joseph V. and Teresa Gallagher Scott.  Dom was preceded in death by siblings, Joseph, Robert and Esther. Love of family, his Catholic faith, and service to others were the three pillars of Dom’s life.
He graduated from Clarks Summit High School in 1949 and enlisted in the United States Naval Air Corps during the Korean War. He served for four years as an aircraft mechanic and as a clerk processing pilot’s logs. He was honorably discharged as a petty officer and enrolled at the University of Scranton and graduated in 1954 on the dean’s list with a degree in accounting. He later earned a master’s degree in accounting from the University of Michigan.
He worked for 37 years at Ford Motor Company in Dearborn, Mich., moving up the ranks from their management training program to ultimately become the manager of the company’s retirement department. Throughout his years with Ford, he without fail called home to check in with his parents and family here in Clarks Summit.
After retirement, Dom moved back to Clarks Summit and served almost eight years on Clarks Summit Borough Council before resigning due to illness. He was the chairman of the finance, sewage, civil service, and recreation committees, and was named Politician of the Year by the local newspaper. He was proud of never having a tax increase during his term.
Dom’s other service to the greater Clarks Summit community included being a member of the Abington Memorial VFW Post 7069 and in charge of the Clarks Summit Memorial Day Parade for 20 years. He visited veterans weekly at the Wilkes-Barre Veterans Center. He was a member of Abington Rotary and awarded Rotary’s distinguished Paul Harris Fellowship Award. He also served as a board member for the Telespond Senior Services and was the director of the food distribution program for the Dalton Food Pantry.
In terms of his faith, Dom was member of the Church of St. Gregory where he regularly attended daily Mass, as well as an acolyte and usher at the 5 p.m. Mass for Our Lady of the Snows. He sang in the church choir, was the president of the Lady of Snows Men’s Club, and was a member of the finance committee for Catholic Social Services. Dom was also proudly a fourth degree Knight of Columbus North Pocono 6050, and served in the highest office available, Faithful Navigator and Grand Knight.
He celebrated the lives of late family members by buying a bench at the Gathering Place in memory of his late brother, Joe, and volunteered at St. Francis Soup Kitchen each year on his late mother’s birthday. Dom’s life will now be celebrated by those who survive him, including his brother, James Scott and wife, Marie, of South Abington; his sister, Teresa Elechko and husband, Melvin, of Dalton; and his many nephews, nieces and cousins.
Family will receive relatives and friends, Thursday, 4 to 7 p.m., at Jennings-Calvey Funeral and Cremation Services Inc., 111 Colburn Ave., Clarks Summit. The funeral will be Friday from Church of St. Gregory, 330 N. Abington Road, Clarks Green, with Mass of Christian Burial at 10:30 a.m. to be celebrated by the Rev. John Lapera, pastor. Interment with military honors, Cathedral Cemetery, Scranton.
In lieu of flowers, memorial contributions can be made to St. Francis of Assisi Kitchen, 500 Penn Ave., Scranton, PA 18503; or the VFW Post 7069, 402 Winola Road, Clarks Summit, PA 18411.

To order memorial trees or send flowers to the family in memory of Dominic Scott, please visit our flower store.