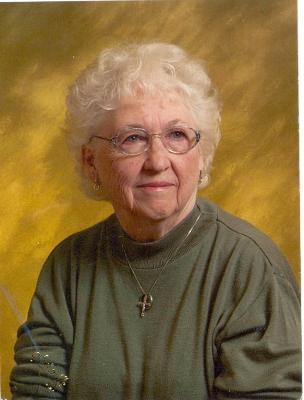 Betty A. Phillips of Clarks Green passed away in her sleep on Tuesday, March 15, at the Abington Manor Skilled Nursing Center, where she had been a patient for the past 18 months. Her husband of almost 60 years, Phil "Pop" Phillips, died Feb. 25, 2003.

Lovingly known as Betty to her many friends, and Nana to her extended family, she will be sadly missed by everybody whose life she touched with her presence.Nana was born on May 17, 1926, in Lewisburg, to Ralph and Grace (Berger) Ammon. With four siblings and more aunts, uncles and cousins than anybody could ever keep track of, she learned at an early age the value of growing up in a large family. Her early years included helping her mom raise younger siblings, participating in her church's youth group and going to Lewisburg High School, and eventually taking some classes at Bucknell University.

As with most of her generation, she was deeply shaped by growing up during WWII. She spent several years waiting and hoping for favorable news about her older brother, Ralph Jr., who was taken captive as a POW early in the war. The family's prayers were answered when Ralph came home in 1945.

1946, Nana met the love of her life. While attending church, a recently discharged Army vet from Harrisburg, starting college at Bucknell, saw her singing in the choir. A friendship ensued and she married Clarence R. (Phil) Phillips in that same church a couple of years later. Shortly after that, another large family was started. After graduation from Bucknell, the young family spent some time in Harrisburg, Philadelphia and Scranton, before settling down in Clarks Green, where they raised their eight children and began a long affiliation with the Trinity Lutheran Church in Clarks Summit.

Nana loved visiting with family and friends, talking with them on the phone whenever possible, her odd collection of cats that she raised over the years, attending church and watching Mass on TV, and knitting. It is estimated that there are hundreds of afghans, and baby blankets hand-knitted by Nana currently in circulation. She was an excellent cook, but claims that she didn't really enjoy cooking unless she was cooking for somebody. Her strongest dislike was birds, probably due to some older cousins chasing her around the barnyard with a couple of chickens when she was 5.

She was preceded in death by her siblings, Ralph Ammon, Harry Ammon and Louise Ammon Martin.

A memorial service will be held Sat. April 9, at 11:00AM at Trinity Lutheran Church 205 West Grove St. Clarks Summit, Pa.

In lieu of flowers, memorial donations may be made to Trinity Lutheran Church, P.O. Box, 544 Clarks Summit, PA 18411.For more information, directions or to send an online condolence, visit www.jenningscalvey.com