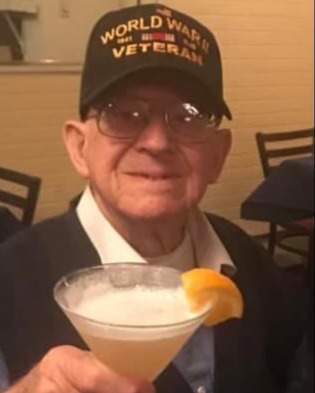 Alfred G. Henningsen, Sr., 95, formerly of Chinchilla and fondly known as the “walking mayor of Chinchilla” who loved talking to everyone, died on August 30th at Serenity Care Personal Care Center, Peckville, due to complications of kidney cancer. His wife, Pauline Henningsen, preceded him in death in 1989, along with two brothers, Edward and Robert, and sisters, Ethel, Ann and Doris.

Son of the late George and Helen (Clark) Henningsen, Alfred attended Abington High School and enlisted in the US Army in 1945, where he performed guard duty overseas of military supplies and equipment against hazards. He received the Army Occupation Medal, the World War II Victory Medal and the Lapel Button issued for no days lost, and received an Honorable Discharge. He was honored for his service with a veteran’s ceremony at Mid-Valley Personal Care Center in 2020, as well as being given a newspaper article and television news story both commemorating his service in WWII.

His hobbies besides watching old reruns on television and spending time with his family included watching the Yankees, the Giants, fishing, visiting his son, Al’s, restaurant, The Gourmet and sitting at the counter reading his newspaper every day, visiting and chatting with all the regulars. He always loved boating on his son’s boats.

Alfred was a humble and simple man that enjoyed spending time with his family, enjoying picnics, outings and going out for his favorite dinner, chicken parmesan. He always had a bunch of war stories to share and joked when we would ask him what he wanted to eat for birthdays that he would be happy with “just a cup of coffee and a piece of buttered bread.” There wasn’t a time when he spoke with his son and wife daily on the telephone that he didn’t tell them “To tell everyone how much I love them.” His stories and his presence will be missed dearly.

The family would like to thank all the people at Serenity Care and Compassionate Care Hospice, especially his nurse, Erin.

The funeral will be held on Tuesday at 1pm at Jennings-Calvey Funeral and Cremation Services, Inc., 111 Colburn Avenue, Clarks Summit. The family will receive relatives and friends from 12-1pm at the funeral home. Interment will be at Abington Hills Cemetery. Friends are asked not to wear black in sorrow, but dress in colors to celebrate Alfred’s colorful life. Memorial contributions in lieu of flowers may be made to the Chinchilla Hose Company, 113 Shady Lane Road, South Abington Twp., PA 18411 (because he was so proud that his son, Al, was a first responder) or the donors choice.

Jennings-Calvey is honored to serve Alfred and his family.

To order memorial trees or send flowers to the family in memory of Alfred G. Henninigsen, Sr., please visit our flower store.